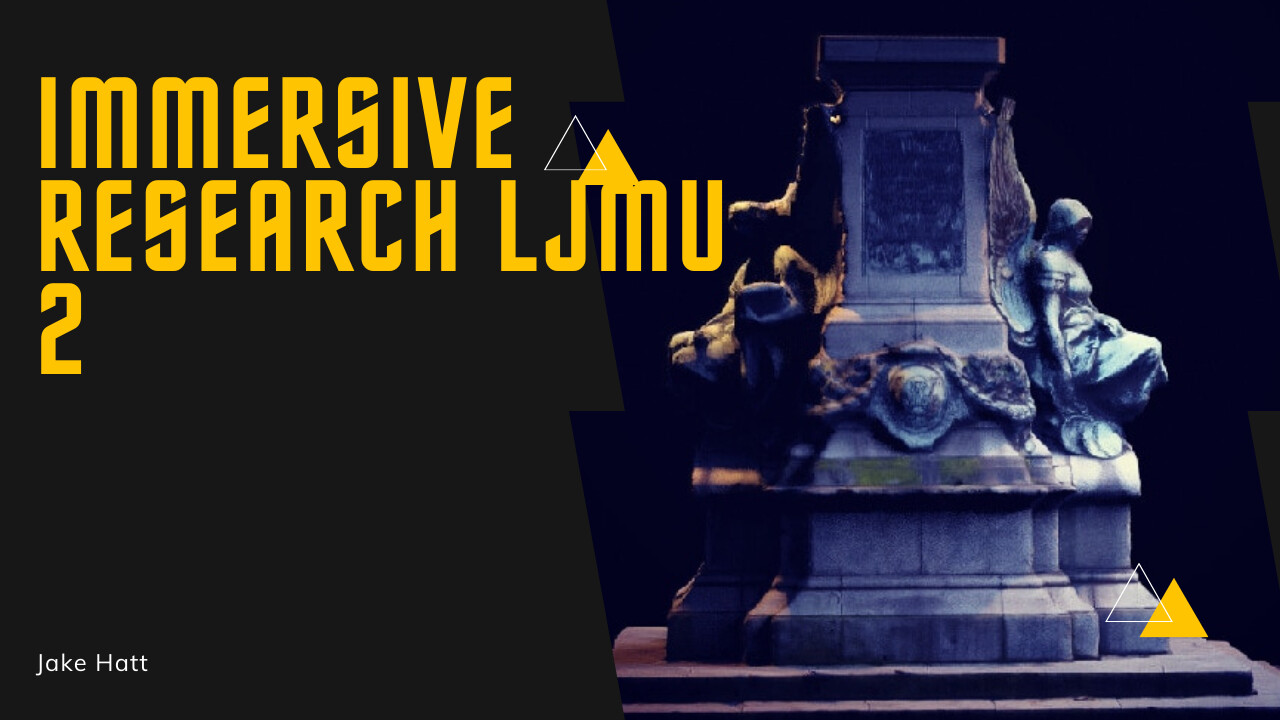 It has been some time since my first posting on this Masters, and in that time we have learned a lot about what it means to be a working artist within the field of immersive. Some of the main topics we have covered have ranged from technical skills such as projection mapping, 360 videos, and Unreal engine to more nebulous ideas such as the art of storytelling itself.

I like to keep my options open and explore every avenue so this will be a more broad net of what I've been looking at. I want to focus on something specific later on.


With the tools and techniques presented to me, I have been performing small experiments to get to grips with the work.
I will start with my research and show experiments towards the end.

this section will outline my main points of research including video links and my general opinion in terms of their application within the field.

Projection appeals to me as it holds great power for relatively old technology. It can be completely transformative to spaces, architecture, and objects.

I have a couple of main points of reference when it comes to projecting images, first is this amazing interactive piece that calculates the height of the sand in a sandpit and projects map topology accordingly. The illusion holds up really well. I like the sand being a medium between the digital and the physical.

Similarly, this topological projection was achieved by another group. This time, however, the end was not educational, but retail-focused. It hones in on the idea of "retail therapy" creating an immersive experience from the rather mundane task of purchasing footwear. It brings to mind a future where your retail outlet becomes something more like a gaming experience.

I like these two videos specifically as they show how a simple idea such as topographical lines may turn something physical into an interactive experience. 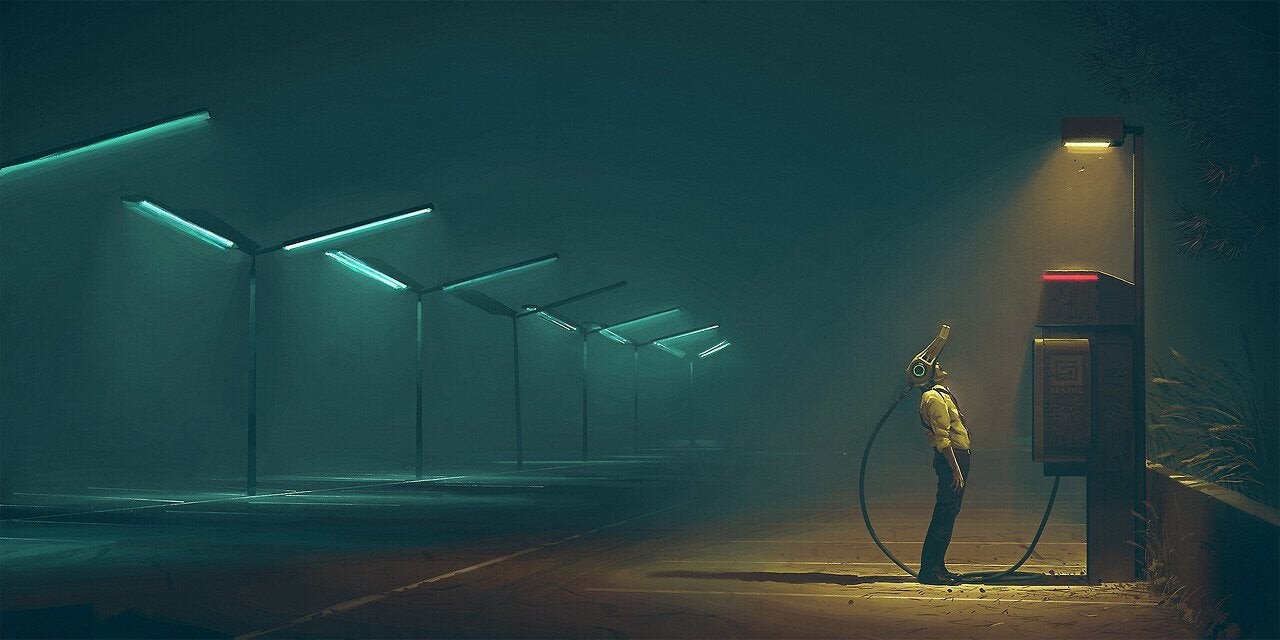 VR Station - Digital Painting - Simon Stålenhag
360 and VR both face similar challenges in the direction of a viewer's attention. VR thankfully has years of game theory to fall back on, 360-degree 3D environments are no new concept to the world of game design. This too can link back to 360 videos, the direction of a viewer's gaze is highly important. a great article about how to do this can be found here https://uploadvr.com/vr-film-tips-guiding-attention/

For me 360 VR is certainly something I would like to see more of in the future, however, I'd like to avoid them for this project. my biggest concern with it is hygiene during the most hygiene conscious time of recent history. I simply don't think a headset is a viable solution to an art installation. Even without the hygiene concerns, I would like to avoid an experience the viewer can have at home.

That being said, I do see a future in commercial VR products. Not only does it lean on pre-existing game design ideas, but in a way, it expands the user's living space virtually anywhere imaginable.

AR and MR are very exciting to me for an admittedly very childish reason. Namely that it's the closest thing to a hologram we have, and with new advancements in Machine sight, it's more accessible than it's ever been. my primary experiments in this field have involved SparkAR as well as Adobe's new product by the name of Adobe Aero.
I watched some talks at the adobe max conference involving Aero and was frankly blown away by how easy the whole thing was. just assemble your scene and triggers similar to any other 3D software (even simpler in some ways) and save it out and boom, it's on your phone blending with reality.
More recently I caught a SparkAR talk by the artist collective Keiken named World-building and merging the physical and digital. the talk was very new-age, trippy, challenging of gender roles, and overall something you'd expect to see on Adult Swim at 2 AM. jolly good stuff. they did something that kind of spoke to me.
They posed the idea of using face filters and MR as a means of world-building. The more you think about it, our digital personas are a world-building exercise, if not world-building then at the very least world-augmenting.
We use filters, selective opinion voicing, selective angles, lighting, moments, and overall decision-making to project our most ideal selves outwards. With the advancement of face filters getting to the point where we can physically sculpt ourselves to any ideal shape imaginable, it's not hard to see a trend of our real-world selves growing ever further from our virtual counterparts. What's interesting about Keiken is that they have taken this and almost turned it into an intentional expressive piece of reality distortion to the point where it becomes fantasy.
Simple sparkAR example

With these various talks I have been watching, the general idea I'm getting is that companies are most excited about AR and the possible ways it may enhance our experience in the world. VR still has a ways to go and Projection almost feels low tech in comparison to what you can do with a virtual lens. It not only has the potential to completely alter our view of the reality we physically occupy, but it has all sorts of applications in education, entertainment, fashion, gaming and so on.

I will briefly touch on the web as it is a sadly underappreciated facet of the world of XR. What benefits the web the most is accessibility. Most people don't want to install an app, or oftentimes even go anywhere to access the content. The web has you covered, and with CSS and JavaScript being probably some of the easiest coding languages out there, it's amazing as a tool for artistic expression. net.art and ARGs (fake conspiracies made up to send players down online rabbit holes, often just used as marketing for an external product) have been prevalent for many years and new developments in 3D web tools have only enhanced this growth. while I could name many such experiences, I think my favorite of recent memory has been this accidental game created from a virtual tour of a house.
https://3d-marketing.captur3d.io/view/keller-williams-louisville-east/8800-blue-lick-rd
8800 Blue Lick Road, from what I have found with proxies to American news sites, was once home to a mafia fencing racket. Boxes were stolen, presumably from trucks and warehouses, and stored here. The owners were incarcerated for their actions, and their home was put on the market without removing the stolen goods. What's even more interesting is that they sent someone in with a 3D camera to take a tour of this labyrinthine property. Apparently, it was an old Baptist church so some oddities in the layout are present, such as a strange walk-in shower room, presumably used for baptism.
The experience, in the end, is a truly unique and unintentionally fascinating narrative of how the criminal underworld live.

This is a collection of my various experiments in XR including 360 videos, photogrammetry, AR, and rear projection. My trademark wide range of unfocused experiments hopefully will help out with future ideas. I think of all the subjects I have covered, the augmented reality side shouts to me the most so hopefully more experiments within this can come out in the future.